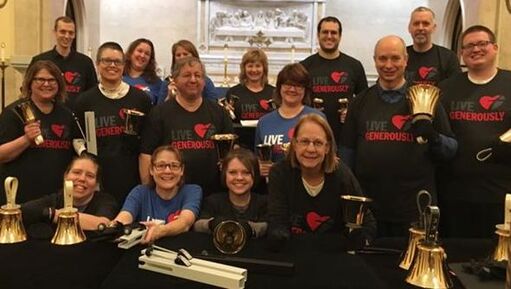 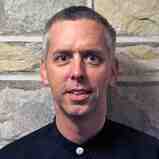 Shawn Gingrich
Artistic Director
​​Shawn serves First United Methodist Church of Hershey as Director of Music Ministry. He has been ringing handbells since 1987 and directing since 1991. In addition to his church work, he is an adjunct music professor at Messiah University in Grantham and Sales Ambassador for Malmark Bellcraftsmen. He holds bachelor’s degrees in Music Education and Sacred Music from Lebanon Valley College, a master’s degree in Sacred Music from Westminster Choir College, and the doctorate in worship studies from the Robert E. Webber Institute for Worship Studies. Shawn and his wife, Laura, have four children, Peter, Sarah, Christian, and Aaron and they reside in Elizabethtown. They have a Weimaraner-mix named Lilah.

Lisa Beard
Lisa started ringing handbells in 1986 at Grace Lutheran Church, Lancaster. She later co-directed the handbell choir at St. John Lutheran Church, Richfield.  While she has served as a church organist, the piano is still her first love.  More recently, she wrote the lyrics for several hymns and liturgical pieces for the “Polka Mass with the Heidelberg Brass Band.”  She is a Medical Laboratory Scientist and enjoys relaxing with a good book or crossword puzzle and spending time in nature.  Lisa lives in Ephrata with her husband, Glenn. ​

Eileen Beazley
Eileen was introduced to tone chimes in 1994, and she hasn’t looked back! She has rung handbells for St. Paul the Apostle Church in Annville, Friedens Lutheran Church in Myerstown, and at Lebanon Valley College, from where she graduated with a bachelor’s degree in English. An avid baker, Eileen loves sharing cookies and cakes with her family and friends, and especially with her daughter, Moira. Eileen lives in Lebanon with her cat, Felix Felicis, and works as a Technical Assistant at the Myerstown Community Library. ​​

Holly Brubaker
President
Holly has been ringing handbells since 1995.  She is a member of Grace United Methodist Church in Hummelstown where she directs the handbell choir. Holly is a certified Project Management Professional (PMP) working for The Hershey Company.  Holly lives in Hummelstown with her husband Tim, and has a blended family with 5 children, a Siamese cat, and 2 new Savannah kittens! Holly and her family enjoy traveling, skiing/snowboarding, camping and e-biking. ​

Ruth Dunnewold Secretary
Ruth has been ringing handbells since 1967. She retired in 2019 from serving for 33 years as an attorney for the Commonwealth of Pennsylvania. Additionally, she is a founding co-director of A-Pealing Praise, the handbell choir at Penbrook United Church of Christ. Ruth also plays the trumpet and recorder. She lives in Penbrook with her husband, David, and their rescue cat, Hobie. She is also the fortunate mother of fellow ringer Isaac Salapa.

Kim Grey
Kim has been ringing handbell solos, and has been a member of ensembles or choirs since 1999. She is a member of St. Paul’s United Methodist Church in Elizabethtown, where she subs in the bell choir when she can as she has a very active toddler. She is a Social Worker at Penn State Health for General Pediatrics, Complex and Palliative Care Pediatrics. She and her husband, Dave, live in Elizabethtown with their daughter Amelia and their cat, Nova. In her free time, Kim enjoys watching Amelia grow and learn, cooking, gardening and spending time with good friends. ​

Nathan Grim
Board of Directors
Nate started playing handbells at his childhood church in 1994. He currently works at Covenant Christian Academy in Harrisburg where he is the fourth grade teacher. Nate also plays for the Hershey Symphony Orchestra, the Greater Harrisburg Concert Band and various local playhouses. In addition to performing, he also teaches clarinet, saxophone, and oboe lessons and loves learning about etymology. Nate holds bachelor's degrees in music education and music performance from Lebanon Valley College. ​

Laine Heltebridle Agent
​Laine retired in 2020 as the director for the Bureau of Planning and Research of the PA Department of Transportation after 31 years with PennDOT. Laine began ringing handbells in 1982 and has served as a church handbell choir director. Laine has also rung with several church handbell choirs in the York area. Laine and his wife, Laura, reside in York with their cats Molly and Carson. As the agent for the ensemble, Laine is responsible for finding venues where the ensemble can ring and publicizing upcoming concerts.

Chrissy Hoffner
​Chrissy has been ringing handbells since 1985. She is a member of Grantham BC church in Mechanicsburg, where she currently works as the Youth coordinator. A messiah College graduate, she enjoys living in Dillsburg with her her husband Mike, children Abby (19) and Josh (17), 2 dogs, 4 cats and 4 chickens. She's a very active volunteer and enjoys gardening and bird watching in her spare time.​​

Kate Kepner
Kate started ringing handbells in 1980 at St. Paul’s United Methodist Church in Elizabethtown and has been a member of the Wesley Handbell Choir at First United Methodist Church in Lancaster since 1985. She also plays the flute, though it is mostly for her daughter’s entertainment these days. She works at Trustmark Health Benefits in Lancaster as a Client Manager. Kate lives in Hallam with her daughter, Natalie, and their cat Emma. ​​

Liz Kielley
Board of Directors
​​​Liz has been ringing handbells since 1983 when she started at her home church in Baltimore, MD. She has been hooked ever since. While handbells are a passion, she supports herself working as a librarian at Messiah University. She lives in Littlestown, PA with several rescued basset hounds (obviously another passion!). When not working, ringing, or rescuing bassets, Liz fills her time gardening, scrapbooking, and motorcycle trips.

John Kilheffer
John started ringing handbells in 2001 as a charter member of the Jubilation Bronze Handbell Choir at the Tree of Life Lutheran Church in Harrisburg.   In addition to ringing, he also enjoys singing and playing percussion.  He's a graduate with a degree in Computer Science from the Pennsylvania State University and works in the Harrisburg area.  He and his wife, Barbara, live in Marysville and when not traveling, enjoy visiting their son, Benjamin, who lives and works in Maryland.

Lois Mason
​Lois began ringing in her church bell choir in her hometown of Upland, California in 1987. She has her doctoral degree in Information Assurance and Cybersecurity and works for the Centers for Disease Control and Prevention. She also works as an EMT and volunteers with East Pennsboro township fire police. She lives in Mechanicsburg with her husband, Michael, their sons, Luke and Derek, and their five dogs.​

Peter McCachren
​Peter has been ringing handbells since 2000, getting his start with the Handbell Choir at First United Methodist Church, Lewistown. Peter rang under the direction of Dr. Shawn Gingrich as a student at Messiah College, studying Accounting with a minor in Church Music. Following graduation, Peter took a hiatus from advanced handbell ringing to sing with the Susquehanna Chorale but continued to ring with the Handbell Choir at First United Methodist Church, Hershey, where he and his wife Cassie are active members. Peter is a Certified Public Accountant and is a manager for Boles Metzger Brosius and Walborn PC in Harrisburg. Peter and Cassie live in Londonderry Township with their children Crosby and Grace.  They thoroughly enjoy every minute they share with them and their cockapoo, Zoe.

Elizabeth McElheny Manager
"Lizzy" has been ringing since 1993 when A-Pealing Praise was formed at Penbrook UCC. in Harrisburg, under the direction of Ruth Dunnewold. She is a Project Coordinator for Aetna’s Medicaid Enrollment department. She resides in Harrisburg and loves spending quality time with her long-term partner, Nick Kohn, their children Briana and Ayden and their "herd" of cats, Yoda, Finn, Chloe and Charley. She also enjoys cross-stitching, video games, cooking and watching her favorite baseball team, the Atlanta Braves. ​

Isaac Salapa
Treasurer
Isaac has been ringing handbells at Penbrook United Church of Christ since 1999. He has also been known to play both the cello and saxophone, though not at the same time. Isaac is a statistician for the Pennsylvania Department of Education. Together with his lovely wife, Nicole, he enjoys going to see heavy metal shows, working out, and traveling across the country (and sometimes outside the country). They live in Harrisburg with two cats who are the real heads of the house: Sylvester and Tibbers.
​​

Janice Wilson
​Janice started ringing handbells in 1994, and is also a member of the handbell choir at First United Methodist Church of Hershey. Having previously worked as a reference librarian in academic and medical libraries, she spent many years as a stay-at-home mom and volunteer. She is now a happily retired empty nester an empty nester with her two sons out on their own, and is looking forward to traveling more in the future. In the meantime, she enjoys puzzles, trivia and reading especially British mystery novels.